Editors Note: The following is an article that was published on July 26, 1979 in The Franklin NEWS RECORD to celebrate East Franklins 50th Anniversary.

The East Franklin Township Volunteer Fire Department officially began operations on July 29, 1929, but it had its beginnings much earlier in the minds of a group of men determined to provide better fire protection for the West New Brunswick area of New Jersey. The department began with 12 members; men like Joseph Godrey and Louis Katko Sr. All of the original 12 members are gone now but they are not forgotten for what they did for their neighbors and community. 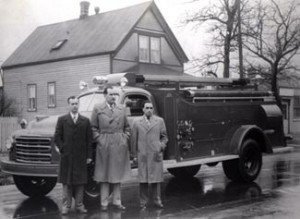 These men could not have picked a worse time in history to start a new volunteer fire department. The stock market crashed in 1929 and the struggles of the nation were reflected in the struggles of East Franklin to survive.

Soon after the department’s formation, a group of firemen left to form a rival fire company. They set up shop in a garage across from East Franklin on Hamilton Street and called themselves the West New Brunswick Volunteer Fire Department. That newly formed company survived only a short while before it went out of existence. Many men have come and gone from the ranks of East Franklin; contributing whatever time and effort they could afford to give. During the Depression years, which lasted well into the 1930’s, it was not unusual for a member to quit because he couldn’t afford to contribute the 25-cent dues. A 1930’s quarter had the buying power of nearly $1.50 today. 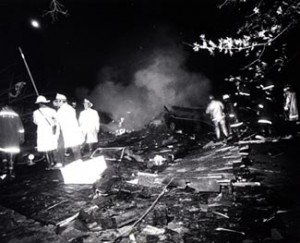 FIRE FIGHTING in the 1930’s and1940’s was quite a bit different from fire fighting today. The first apparatus was a 1922 chain drive, solid tire chemical wagon carrying 150 gallons of water in three separate tanks. Each tank was activated by turning over the cup of acid inside the tank to cause the soda bicarbonate and water mixture to make the carbon dioxide gas which forced the water through the narrow diameter hose.

In the words of John Gresh, who joined the department the same day in 1931 as did George Veros, "we had a pretty good chance of stopping the fire in the house if it hadn’t broken through the walls. If it was through the walls we didn’t have enough water to stop it. If we ran out of water with that chemical wagon, we had to go back to the fire house to refill and recharge the tanks. By the time we got back to the fire, sometimes it was a little too late. It got pretty hot in a fire too because we didn’t have any turnout coats or helmets. We couldn’t afford any."

A LOT of things have changed at East Franklin over the years. In 1949, a custom Studebaker pumper was purchased which was the first of it’s kind in the area. Any member who had a chance to drive the Studebaker will never forget its gearshifts. As the need for another pumper arose, the men of East Franklin decided to build their own apparatus to fight field fires. Contributing to their time, efforts, and skills they converted a 1952 Chevrolet truck frame into a field truck that was in service for 25 years. 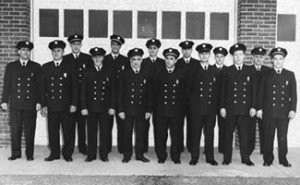 In 1955, a new and larger firehouse was constructed at the present site of East Franklin on Pine Grove Avenue near Highland Avenue. The new house is not many blocks from the original firehouse, which was located in a garage on Hamilton Street at Highland Avenue. In the intervening years a great many changes have taken place in fire fighting apparatus and personal protection equipment such as Scott Airpacks to provide breathing air for the fire fighter working in a poisonous and smoky environment, stronger and larger diameter hose to bring more water, faster to the fire, and a reliable system of fire hydrants in the streets of Somerset and bigger capacity pumpers. The combined water pumping capacity of East Franklin apparatus today is more than 150 times greater than it was 50 years ago. 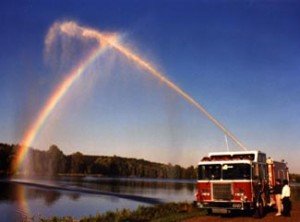 During the past five decades many changes have come to East Franklin and our community, especially in the attitudes of people toward each other. It’s not uncommon in today’s society to hear someone ask, "What’s in it for me?" One thing, however, has not changed. Each and every member of East Franklin continues to take and uphold the oath as an East Franklin volunteer fire fighter: "To serve our community for glory and honor" . . . and nothing else.